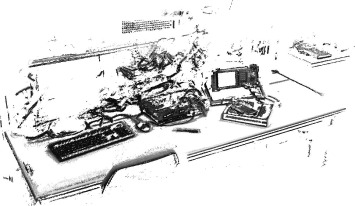 This paper presents new and improved methods of depth estimation and camera calibration for visual odometry with a focused plenoptic camera. For depth estimation we adapt an algorithm previously used in structure-from-motion approaches to work with images of a focused plenoptic camera. In the raw image of a plenoptic camera, scene patches are recorded in several micro-images under slightly different angles. This leads to a multi-view stereo-problem. To reduce the complexity, we divide this into multiple binocular stereo problems. For each pixel with sufficient gradient we estimate a virtual (uncalibrated) depth based on local intensity error minimization. The estimated depth is characterized by the variance of the estimate and is subsequently updated with the estimates from other micro-images. Updating is performed in a Kalman-like fashion. The result of depth estimation in a single image of the plenoptic camera is a probabilistic depth map, where each depth pixel consists of an estimated virtual depth and a corresponding variance. Since the resulting image of the plenoptic camera contains two plains, the optical image and the depth map, camera calibration is divided into two separate sub-problems. The optical path is calibrated based on a traditional calibration method. For calibrating the depth map we introduce two novel model based methods, which define the relation of the virtual depth, which has been estimated based on the light-field image, and the metric object distance. These two methods are compared to a well known curve fitting approach. Both model based methods show significant advantages compared to the curve fitting method. For visual odometry we fuse the probabilistic depth map gained from one shot of the plenoptic camera with the depth data gained by finding stereo correspondences between subsequent synthesized intensity images of the plenoptic camera. These images can be synthesized totally focused and thus finding stereo correspondences is enhanced. In contrast to monocular visual odometry approaches, due to the calibration of the individual depth maps, the scale of the scene can be observed. Furthermore, due to the light-field information better tracking capabilities compared to the monocular case can be expected. As result, the depth information gained by the plenoptic camera based visual odometry algorithm proposed in this paper has superior accuracy and reliability compared to the depth estimated from a single light-field image.