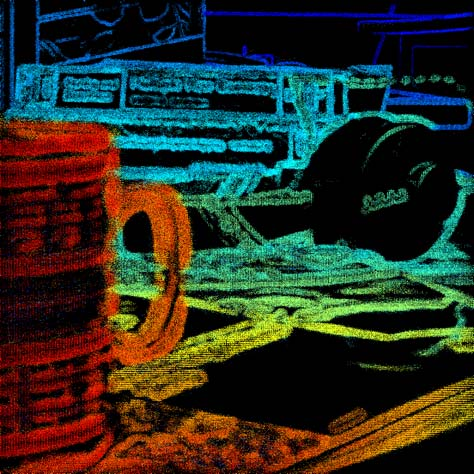 In this paper we propose a novel method for depth estimation based on a single recording of a focused plenoptic camera. The presented algorithm is based on multiple stereo-observations within the multi-view micro images of the focused plenoptic camera. Here, pixel correspondences are found based on local intensity error minimization. Since our algorithm works directly on the micro images, no sub-aperture or epipolar plane images have to be synthesized. Due to the fact that we perform stereo matching based on local criteria we only estimate depth for pixels with sufficient gradient. Thus, we reduce the complexity of the problem, while neglecting uncertain stereo correspondences. Our algorithm incorporates multiple stereo-observations of the same point in a probabilistic depth map. We will show, that this (inverse) depth map can be modeled as a map of Gaussian distributed random variables. Thus, each depth pixel consists of an estimated depth and a corresponding variance, which gives a measure for the uncertainty of the estimation. This uncertainty information can be used in subsequent filtering methods.